✨ LAUGH EAT LEARN IS ON BREAK AND WILL RETURNAUGUST 17TH

Today’s recipe is directly from my favorite, Food Network Magazine. Jonathan and I have a monthly “Food Network Night” where we each create a recipe from the monthly magazine. We both make the entire dish and have a great date night during our cooking. It’s a good way to learn new recipes and hang out. Craving Pizza & BBQ? Pin it to save!
This month I chose to make this tasty Hawaiian BBQ Pizza. It looked simple enough for a week night dinner and movie in. With a little prep, you will be enjoying this sweet and spicy twist of a pizza! Save Print
Hawaiian BBQ Pizza
Author: Alexis Sanchez
Ingredients
Instructions
Notes
I couldn't find these in shredded or in blocks, so I bought the sliced thinly kind and diced into small pieces.
3.5.3226
39
SHARES
PinShareTweetSubscribe 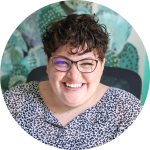 Hey there, I’m Alexis! I’m a low carb living, Cuban and Puerto Rican, living in Seattle, Washington. I serve as a brand + web designer for fellow entrepreneurs by day, find joy in sharing my low carb recipes, and am a pure perfectionist. hey there, i'm alexis!
I'm a 30 something bubbly and creative teacher turned web designer living in Seattle, Washington. I absolutely love designing unique brands + websites for fellow teacherpreneurs, creatives, small businesses, bloggers, & many more. When I'm not working on all things Laugh Eat Learn, I enjoy cooking, movies, reading (always with caffeine in hand), and organization of literally everything. I'm also a pure perfectionist which makes everything a little more fun!

Sign up below to receive brand new blog posts sent directly to your inbox!

Buy me a coffee